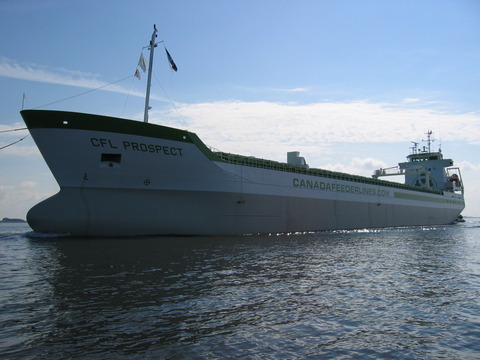 This CFL Prospect was built in a series of 6 ships of the Jumbo 6500 type and has a loading capacity of 6500 DWT. Four ships were built for the Groningen shipping company Canada Feeder Lines and 2 for Rederij Boomsma from Sneek. The ship complies with ice class 1B.

In the period 2007-2008 Hoekman Shipbuilding once again showed its diversity in the maritime sector. In addition to building cutters and trawlers, it built the engine room and other technical areas in 6 seagoing vessels during this time. The ships comply with ice class 1B, which means that the ship is resistant to ice up to a thickness of approximately 0.4 meters.
In this series the Frisian Spring and Frisian Summer were built for Rederij Boomsma.
The CFL Prospect, CFL Performer, CFL Patron and CFL Prudence were built for Rederij Canada Feeder Lines.

Article about the Jumbo 6500 ships.

Hoekman Shipbuilding has built in various engine rooms for seashipping.